Food costs rising in BC: Lack of income remains cause of food insecurity

Average monthly cost to feed a family of four in Vancouver is $1,098

With the rising cost of food, housing and overall living, the issue of addressing hunger requires a multi-dimensional approach. It does not exist on its own.

The latest Food Costing in BC report highlights the increasing cost of food. Produced by the BC Centre for Disease Control and Provincial Health Services Authority, this report breaks down the cost of a nutritionally adequate diet.

The data in this report represents the “average monthly cost of a nutritionally adequate, balanced diet in BC based on the National Nutritious Food Basket and provides insight into the effects of household food insecurity on individuals and families.”

“….the root cause of household food insecurity isn’t the price of food – it’s lack of income.”

BC Centre for Disease Control, Food Cost in BC 2017 report

Not surprisingly, food costs have been increasing by over 4% on average since 2015. The average monthly cost for a family of four in Vancouver is estimated at $1,098.

Income supports do not provide enough for food

Currently, income assistance rates are well below what is considered the poverty line.

The poverty line is currently approximately $21,000 for a single person or $30,000 for a family of two. This is based on Statistics Canada’s 2016 Market Basket Measure data for Vancouver and is adjusted for inflation to 2018.

“For low-income people, healthy food is really rare. It’s much easier to buy processed, cheap, non-nutritional food to fill that stomach, but that doesn’t go very far when you are walking around all day or looking for work or have health issues or trying to raise a family.”

A single adult on income assistance in BC receives $710 per month. The average rent in a private Downtown Eastside SRO hotel room is now $687 per month. This is an increase of $139 from last year’s average of $548, according to Carnegie Community Action Project’s 2017 Hotel Survey and Housing Report.

If you subtract the cost of housing ($687) from the monthly welfare rate for a single adult ($710), only $23 remains. $23 is less than a dollar per day to spend on food, transportation, and other necessities.

This budgeting does not adequately reflect the cost of food or cost of living, especially in a costly city like Vancouver. In this scenario, a single person on income assistance simply has no money for food. There is no other choice but to rely on charity, food banks, and other community food programs in order to eat.

How to support marginalized communities

Last year in the Downtown Eastside, many longstanding holiday meal efforts were thwarted by ‘parachute’ groups who showed up to serve meals (generally fast food) on the street. Many chefs and longtime organizers were disappointed to see much food waste for other healthy community initiatives, which were negatively impacted.

The BC Poverty Reduction Coalition hopes individuals will go beyond charity as part of their #RethinkGiving campaign.

As a means to help others, many people feel the urge to donate to charities such as food banks. These organizations offer immediate and necessary relief to those in need. However, this relief often lacks long-term solutions to make lasting change.

The #RethinkGiving campaign considers political engagement, education, and community action as ways to address the root cause of poverty.

For example, in addition to donating to those in need, they suggest emailing your MLA with this handy letter template to ask them to commit to an Accountable, Bold and Comprehensive poverty reduction plan for BC.

As part of the #RethinkGiving campaign, the Poverty Free Action Team has also created a “12 Days of Advocacy” printable advent-style calendar. It features a task to complete to take action against poverty in BC for 12 days, starting on Christmas Day.

A commitment to food security in 2019

Vancouver Neighbourhood Food Networks send wishes for good health and prosperity to our communities across Vancouver for the new year. Amidst rising costs and rising challenges to food security, we remain committed to feeding communities well–whether through meal programs, gardens, or food skills workshops. We also commit to fighting poverty–the root cause of food insecurity–though our everyday work.

From working as food programmers, advocates, and community developers, we understand how food insecurity is deeply tied to poverty. The inability to feed oneself directly hinders one’s ability to live a healthy lifestyle.

We encourage our supporters to visit ABCplan.ca and voice your support, participate in the Poverty Action Team’s 12 Days of Advocacy, and learn about other ways to make long-term change in our communities. 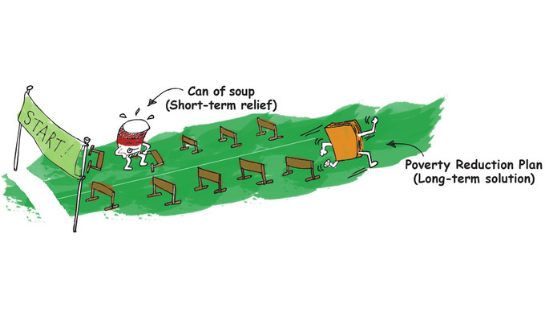