Food and culture are deeply intertwined: food reflects one’s cultural identity and helps maintain connection to one’s community. For many migrant and newcomer communities in Vancouver, food is a means to connect with and retain one’s culture and identity. Cultural food assets, that may include small family businesses such as green grocers and restaurants, are significant to a  neighbourhood, especially for diasporic populations and equity-denied groups.  These businesses provide community members with access to important cultural food items, ranging from produce, herbal medicines, traditional goods and ethnic meals. They also function as vital  community spaces, providing community members with access to culturally appropriate resources and supports, including job opportunities. These cultural food assets represent an intangible cultural heritage that refers to the forms of culture that are important to groups of people, embedded in everyday life, and critical in accessing, experiencing and transmitting one’s culture.

However, due to increased pressure from redevelopment and gentrification, these invaluable cultural food assets are under threat of displacement in many neighbourhoods across Vancouver.

Renfrew-Collingwood neighbourhood is home to a number of cultural communities, composed of folks of Filipinx, Korean, and Chinese descent. Cultural food assets are concentrated  at 5163-5187 Joyce Street, and feature a number of Filipinx, Korean, and Chinese restaurants, small grocers and convenience stores. At the beginning of 2021, a new development was proposed for the site, to build a 32-storey condominium tower, featuring parking, retail and a library. The re-development of 5163-5187 Joyce Street threatened to displace multiple small businesses and restaurants, resulting in significant loss of valuable cultural food assets and, with that, intangible cultural heritage, disproportionately impacting residents of colour and other equity-denied groups. This, paired with lack of meaningful and accessible community engagement and consultation, sparked extensive community organizing and advocacy efforts.

Spearheaded by Renfrew-Collingwood Food Justice of Collingwood Neighbourhood House, the campaign brought together a number of community organizations and groups in a Joyce Street Action Network to protect beloved cultural food assets at 5163-5187 Joyce Street. For example, Sliced Mango Collective – a youth organization that centers Filipinx identity and cultures, has lent its support to the campaign. The coordinated organizing and advocacy efforts led to a successfully lengthened public engagement period, city staff changing their approach to community engagement sessions to include non-English languages, and ultimately, a halt by the developers in continuing their development application with the City of Vancouver.

While achieving this significant win, Renfrew-Collingwood Food Justice Staff recognized that the threat of displacement of cultural food assets is an ongoing and persistent issue for many communities in Vancouver, and began to consider systemic methods to address the issue. Over the fall and winter of 2021-22, Renfrew-Collingwood Food Justice team worked to advocate for development of a motion to protect and support cultural food assets in neighbourhoods across Vancouver. The team worked in consultation with a number of cultural community organizations, including Heritage Vancouver, Chinatown Transformation Team, Food Policy Council, Punjabi Market Collective, Hogan’s Alley Society, and hua foundation, to develop the motion.  After over 5 months of work, the motion is set to go to the City Council on Tuesday, March 29th, 2022.

Councillor Christine Boyle’s Motion:  On Protecting and Supporting Cultural Food Assets and Other Forms of Intangible Cultural Heritage in Vancouver

Community advocacy groups hope the motion will lead to the development of policies that will:

Your Support is Needed – How YOU Can Help 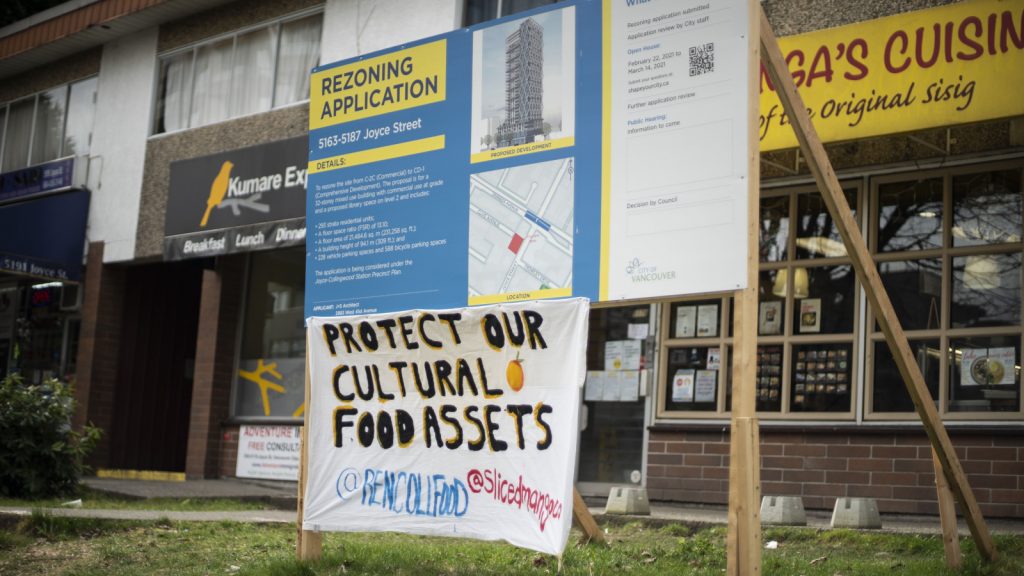